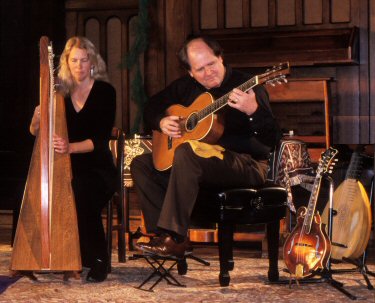 Linn Barnes and Allison Hampton have been concertizing together for the last forty years. They began their performance and recording careers as duo-luternists playing the court music of 16th century Renaissance Europe. They became interested in Celtic music largely through the works of 18th century Irish composer Turlough O'Carolan. As their interest in Celtic music grew, the need for a broader range of instrumentation became apparent. Ms. Hampton has focused exclusively on a variety of nylon and wire strung Celtic harps, while Mr. Barnes, in addition to the lute, now plays an assortment of steel stringed instruments, including the guitar, harp-guitar and cittern. In addition, Mr. Barnes plays the Irish (Uillean) pipes.
Their resume speaks for itself. Thirty-five years on the acclaimed Dumbarton Concert series in Washington D.C., where their annual Christmas program, "A Celtic Christmas" was described by The Washington Post as "a Washington institution..." They have appeared at the Kennedy Center, the Folger Shakespearean Library, the Smithsonian Institution, many of the Washington Embassy series, held extensive performances at colleges and Universities on the East Coast, including Yale University Musical Collection in New Haven, Connecticut, Georgetown University, George Washington University, The American University, The University of Maryland, and The University of Virginia. 1991 marked their first tour of Colorado, where they performed for arts councils, Colleges and churches. They have made five successful European concert tours, which included 1988, 1990, and 1996 appearances at the prestigious Inter-Celtic Festival in Lorient, Brittany, France. They have made frequent appearances on both Washington and national radio and television.