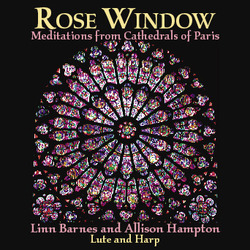 THE INSPIRATION FOR "Rose Window, the new recording by Linn Barnes & Allison Hampton, can be summed up in two words: location, location. While visiting Paris last spring, the duo found a flat between two grand, ancient churches: St. Germain-de-Pres and St. Sulpice. On a whim, Barnes and Hampton arranged to perform at both cathedrals. The ensuing lute and Celtic harp concerts were informal, the music entirely improvised, the mood subdued and soulful.

Fortunately, the intimate performances were recorded, making up "Rose Window," subtitled "Meditations From Cathedrals of Paris." Though the album's seven performances make for a lovely weave of string music, certain tracks stand out: "La Dame des Pres," by virtue of its haunting lyricism; "The Shades of St. Germain," with its bell‐tolling tones; and "Alchemy," which takes advantage of the sparking compatibility of Barnes's high‐pitched lute and Hampton's small Celtic harp. More often than not, the duets sound as if they were arranged for each setting rather than composed on the spot, and the performances quietly reveal the intuitive rapport these musicians have developed in the past 25 years. No doubt "Rose Window" will pop up on a lot of "New Age music" Internet lists in coming months, but don't be fooled. Its charms are timeless.
— Mike Joyce,The Washington Post

Here's some music that seems to fit the spirit of the season — it wasn't written for any particular tradition or religion or ritual. In fact, this music is purely improvised by Linn Barnes, who plays the lute, and harpist Allison Hampton. The Washington‐based duo of Barnes and Hampton found themselves on holiday in Paris, where they rented an apartment on the Left Bank, not far from the church of St. Germain des Pres. They asked the priest if they could record and perform an impromptu concert in the space, and he agreed. The CD Rose Window also includes their performances at St. Sulpice. It may have been recorded in a Christian setting, but the music seems appropriate for many moods of the season: the festival of lights, Christmas, 12th night, the winter solstice, or any time the snow sparkles on a clear, cold night.
— NPR

Listen to The Shades of St. Germain